The gender prediction test result is easy to read!   The control test window will change color to either pink (Girl) or blue (Boy).

Get a
Baby Girl or Boy
Get your Perfect Baby Now Start as Early as Tonight! 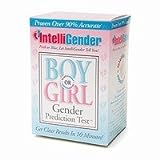 Designed for easy home use by expectant mothers who are curious about their babys gender. Simple to use urine test can be performed as early as 6 weeks following the first day of a missed period. Intelligender Gender Detection Kit. Includes 1 Test Kit. Results in 10 Minutes.